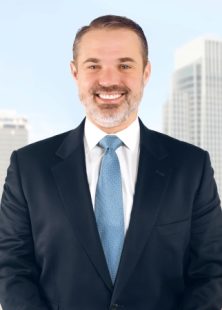 Rob joined Bridgepoint in 2023 as Managing Director, bringing more than 10 years of M&A, advisory and capital raising expertise. Based in New York City, Rob leads the firm’s coverage of the Consumer and Retail sector.

Prior to joining Bridgepoint, Rob was a senior banker in Stifel’s Consumer and Retail group, where he focused on delivering highly-impactful outcomes for clients across multiple verticals including Health and Wellness, Branded Consumer Products, Outdoor Enthusiast and Retail. Prior to Stifel, Rob worked in Jefferies’ M&A group, leading transaction execution across multiple industry verticals. Over the course of his career, Mr. Schmidt has advised on more than 35 M&A, advisory and capital raising transactions representing over $25 billion of deal value.

Rob holds an MBA from the Chicago Booth School of Business and a BA from the University of Pennsylvania. He carries Series 79 and 63 licenses and is a CFA Charterholder.